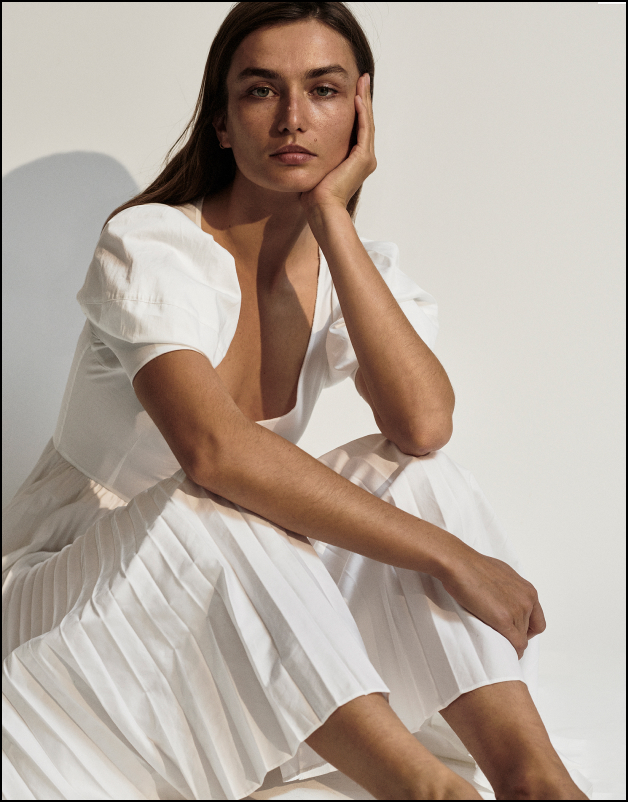 SHOP THE LOOK /White Caitlin Cotton Poplin Dress by Khaite
She might be a face that has come to represent natural beauty at its best, but more importantly, Andreea Diaconu is a vocal activist who, despite her reservations, is exactly the voice that fashion needs now

Andreea Diaconu is barefaced, dressed in an old t-shirt, facetiming in the early morning from her house in Tofino, on the west coast of Canada. Her and her husband have just returned from a couple of months on their sailboat, where they had patchy reception, and it was near impossible to get hold of her. However, the more you get to know Diaconu, the more it is clear that that is just how she likes it.

Diaconu might be recognised as the face of countless fashion and beauty brands, and an international cover girl, as she has been modelling since she was just 14 years old, but modelling was always a means to an end for her, and right now she says that she is in a ‘transition’, and is trying to figure out where it will land. The transition seems to be fuelled by her return to education, and a slight disillusion with the fashion industry as a whole. Not, to be clear, that she vocalises that verbatim, but over the last few years, Diaconu’s values, in terms of the environment, sustainability and her personal lifestyle, have taken priority over her modelling career. Though that comes with issues.

“During covid, I decided that I was going to stop working with brands that don’t align with my values,” she says. “But that just meant that I basically stopped working for a couple of years. There might be, say, two brands that do align, in terms of how they produce and the materials they use, but they can’t afford to pay me, so it became really difficult.” But as someone who openly and knowledgably speaks her mind on the subject, it meant that brands started hiring her as their ‘face’ of sustainability. Just don’t mention organic cotton to her. “As someone who does speak my mind, I would point out to brands that they aren’t actually doing that much. Right now, we need to be taking big leaps, not little steps, and not just congratulating ourselves on using organic cotton. I mean, fuck off, in the grand scheme of things, that doesn’t do shit. There is this school of thought that it’s so good that we are talking about sustainability, as ten years ago it wasn’t even on the radar, but that is what we are all really good at, just talking about it. I have looked at countless reports and there is very minimal progress actually being implemented. Sorry, but I am on a bit of a downer with this stuff.” 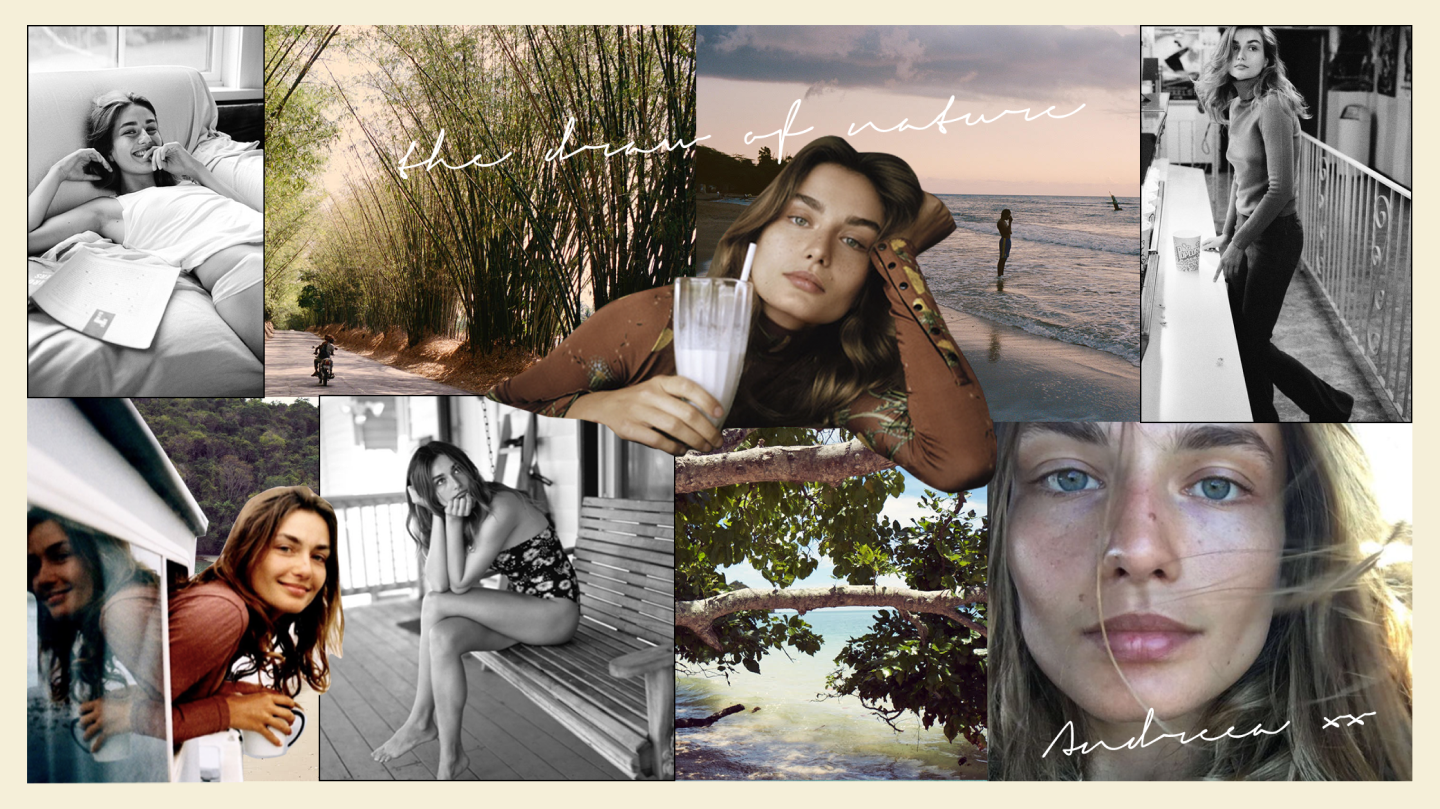 “I try to make informed choices, but I know that comes from a place of privilege, having access to knowledge and the time to research good choices.”

Whether on a downer or not, Diaconu also knows that she herself isn’t perfect. Her job means that she travels on aeroplanes regularly, and while in her day-to-day she cycles everywhere, she also has a diesel car, so… “I try to make informed choices, but I know that comes from a place of privilege, having access to knowledge and the time to research good choices. It is different for everyone in terms of what access they have, and where they are located.” Surely the little things that everyone can do, can add up to something important? “I agree and disagree with that, as I think it is the big companies that need to make big changes first, to lead the shift. I read an article the other day about a European airline that was still flying their aeroplanes, even with no passengers, to keep their slot at the airports. So, what does it matter if I recycled my tuna can, if companies are flying empty aeroplanes everywhere?!” As much of a downer as it is, she has a point.

“However, my husband is more optimistic than me, and excited about the future of fashion,” she says to counter. “I am too, as I know that fashion influences culture, so once big companies start doing more, then it will have a domino effect. It is just so hard to have transparency in the supply chain, as everything is globalized and interconnected in a way that is colonial. It’s entangled.”

Diaconu speaks from experience, she grew up in Bucharest in Romania, and her grandmother worked in a textile factory, so she is very familiar with how one big change can affect others further down the line. “For my grandmother, it changed her life, and it was an amazing opportunity, but the working conditions were absolutely horrendous. She’s pretty much deaf in both ears because of how loud the machines were. There was no such thing as safety, and she had colleagues who lost fingers. But at the same time, we wouldn’t have been able to have food if she didn’t have that job. I am intimately aware of that, but we can do better.” 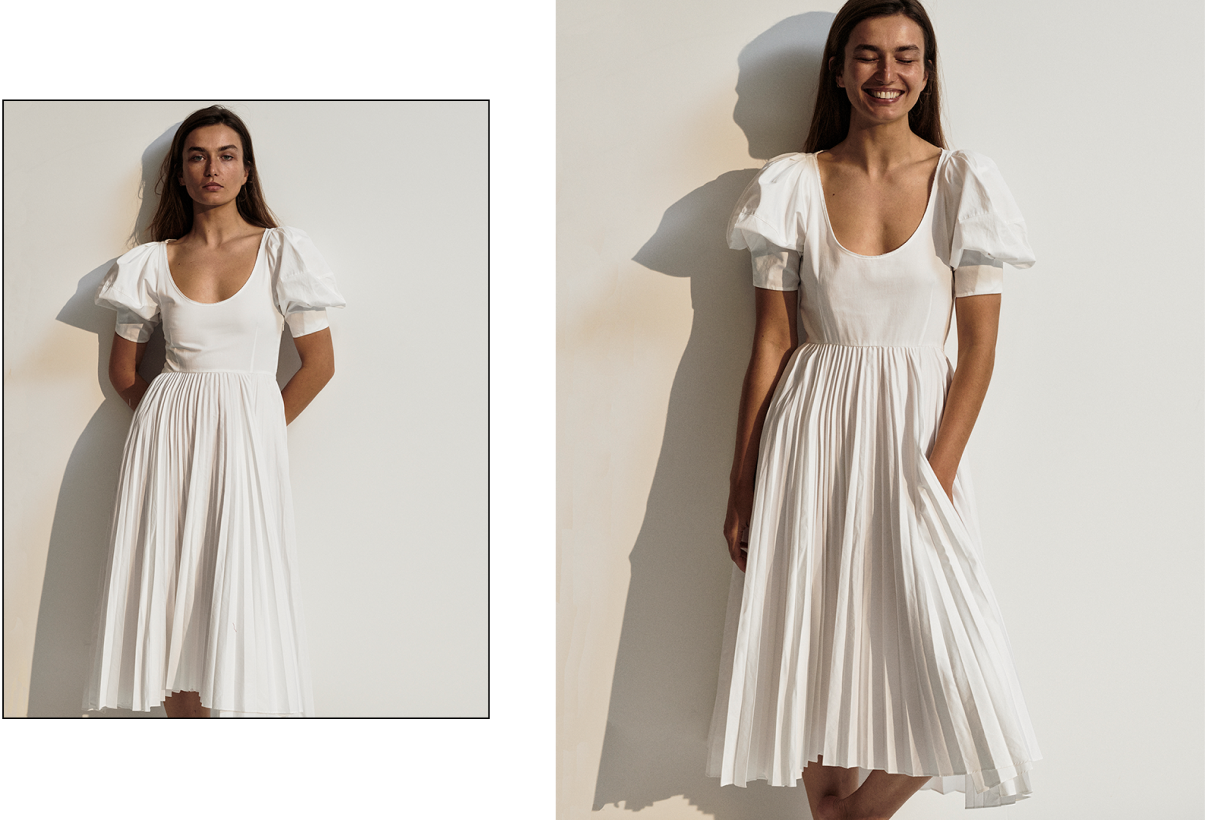 “I think that is why what Clare is doing at Reluxe is great, in that she is curating pieces that are going to look good for a long time.”

One of the main things that Diaconu recommends is to encourage and normalise not buying new clothes, and only buy pieces that are versatile and have longevity. “I think that is why what Clare is doing at Reluxe is great, in that she is curating pieces that are going to look good for a long time. No-one should be changing their closet every year or every season, just invest in pieces that you are going to have forever, that don’t contain any unnatural fibres.” In terms of her own shopping habits, Diaconu only buys something if she really needs it.  “I am a perspective wizard in a way, as I grew up so poor in Romania, and we never had new clothes. We had the neighbours’ clothes when they outgrew them, then you gave those clothes to your other neighbour when we outgrew them. Then maybe your aunts got it, and then it became like a rag, so it became a table cloth, or someone made a quilt. Clothes were never thrown away. I think that it is really nice to see a quilt made of fabrics that have always been part of your life. There is a familiarity. My grandmother wears this vest that I used to wear in high school, and it have become a reliable staple of hers. I find it calming.”

In the past, Diaconu only bought the cheapest things, but now she can afford it, she buys just silk, cashmere and wool (yes, she realises that is privileged). Those pieces aside, she relies on vintage where possible. And that includes pieces for very special occasions… “I just bought my wedding dress on Reluxe! I would never wear a traditional wedding dress, and we are already married, but my grandmother said that she wouldn’t come to our garden wedding party if I wasn’t in a wedding dress, so I had to buy one!” As the party is in July, we won’t reveal what she bought, but we can confidently say that she will look incredible. Naturally. 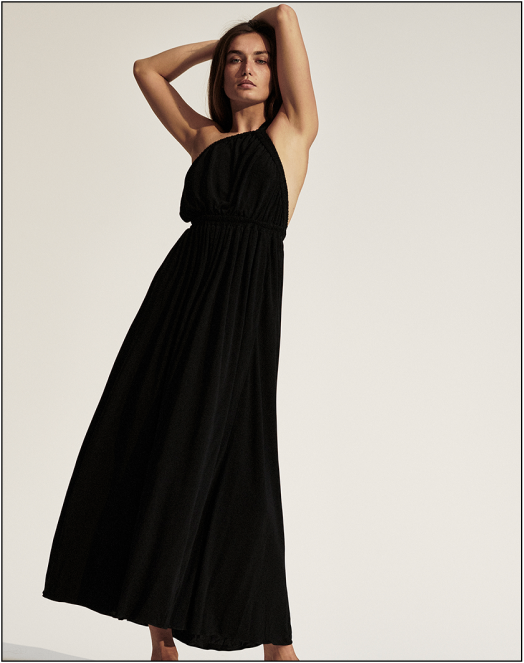 SHOP THE LOOK /Black One Shoulder Dress by Matteau x Relove
“I have always been resistant to combining my world and the fashion world, and I am having a tricky time figuring out what my role could be.”

Diaconu has never been interested in fashion, and admits that she isn’t someone who expresses herself through clothing, though she does like very colourful things. However, she knows that fashion and the world of it, changed her life. It is a huge part of who she is, and she appreciates that. After all, she was only 11 when first approached by a local modelling scout, but waited a few years before she stepped into it fully. Always with the plan to make enough money to go back to school. When she was 14, a teacher asked her what she wanted to do, and she said she wanted to go to Columbia University in New York to study. This year marks her third year at Columbia studying Sustainable Development and Psychology.

Currently she spends six months in New York, and six months in Canada. When she is at school, she only models Fridays and Mondays, so if you want her, you have to really want her. This fall she starts an accelerated program at Columbia, will be a school every day, and knows that she might not work at all. Following that, she has plans to study clinical psychology. While she is not worried about her career, it is all part of that ‘transition’ we spoke to earlier. Diaconu knows that there are a lot of great people in fashion, doing a lot of great work, naming Cameron Russell as someone she hugely admires. But personally, she doesn’t think she has the capacity to follow in her footsteps just yet. “When I was living in New York, I was so out of tune with what my needs were, and I was just in survival mode. I was working all the time to make money to send home to my family. But now I am at the point where I don’t need to do that, and I can lead a slower and simpler lifestyle.” Prior to meeting her husband, the model Simon Nessman, Diaconu was going to move to Alaska or Washington State. But Nessman is from Tofino, and as it had a similar landscape to what she was craving, she went there. “I am a very social person, and get my energy from people, but I wanted to be in nature. It is nice to look up at the stars, and my nervous system is a lot more regulated. It was a mental health and personal choice decision.”

“I have always been resistant to combining my world and the fashion world, and I am having a tricky time figuring out what my role could be. But I also know that it is very important to change the culture in the industry, I just haven’t found my place in it.” Eventually, Diaconu plans to move out of modelling completely, but thankfully she doesn’t sound like she is quite finished with fashion as a whole. As, whether on a ‘downer’ about the current state of it or not, hers is exactly the voice fashion needs now.