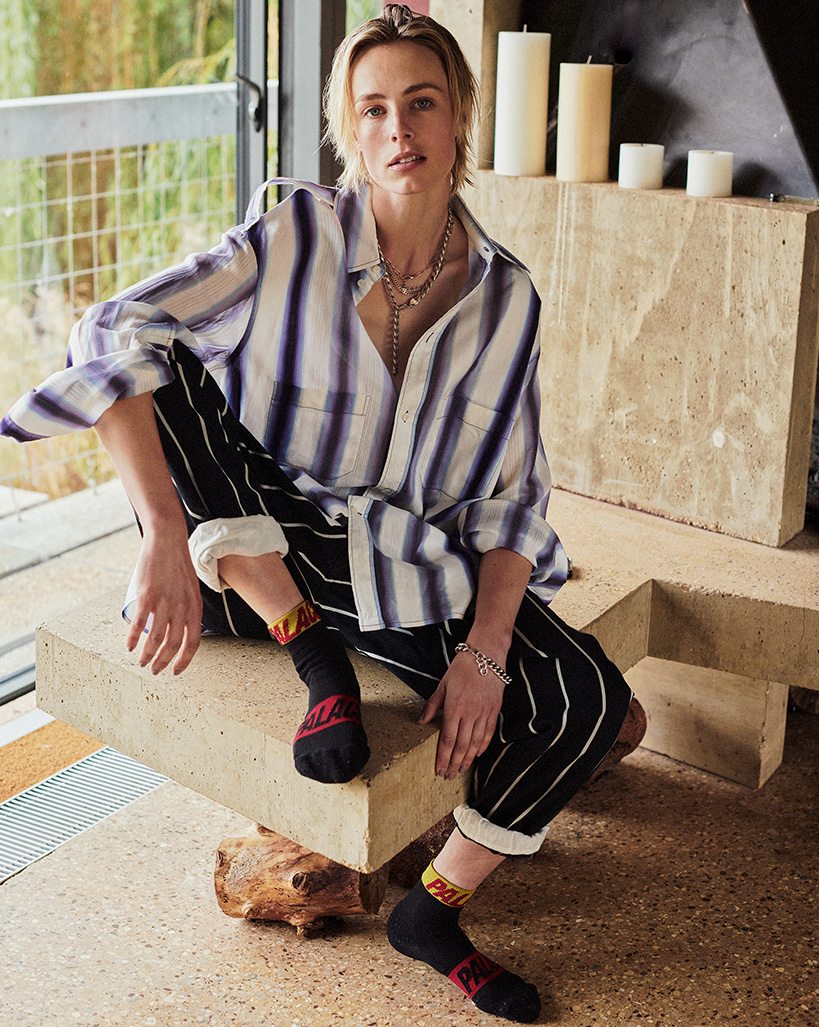 Edie Campbell is one of the most iconic faces of her generation, carving out a stellar career working with the biggest brands in fashion, but it is now her homelife that drives her. Inviting Reluxe into her world, she reflects on her relationship with clothing, and the inherent flaws in the industry. 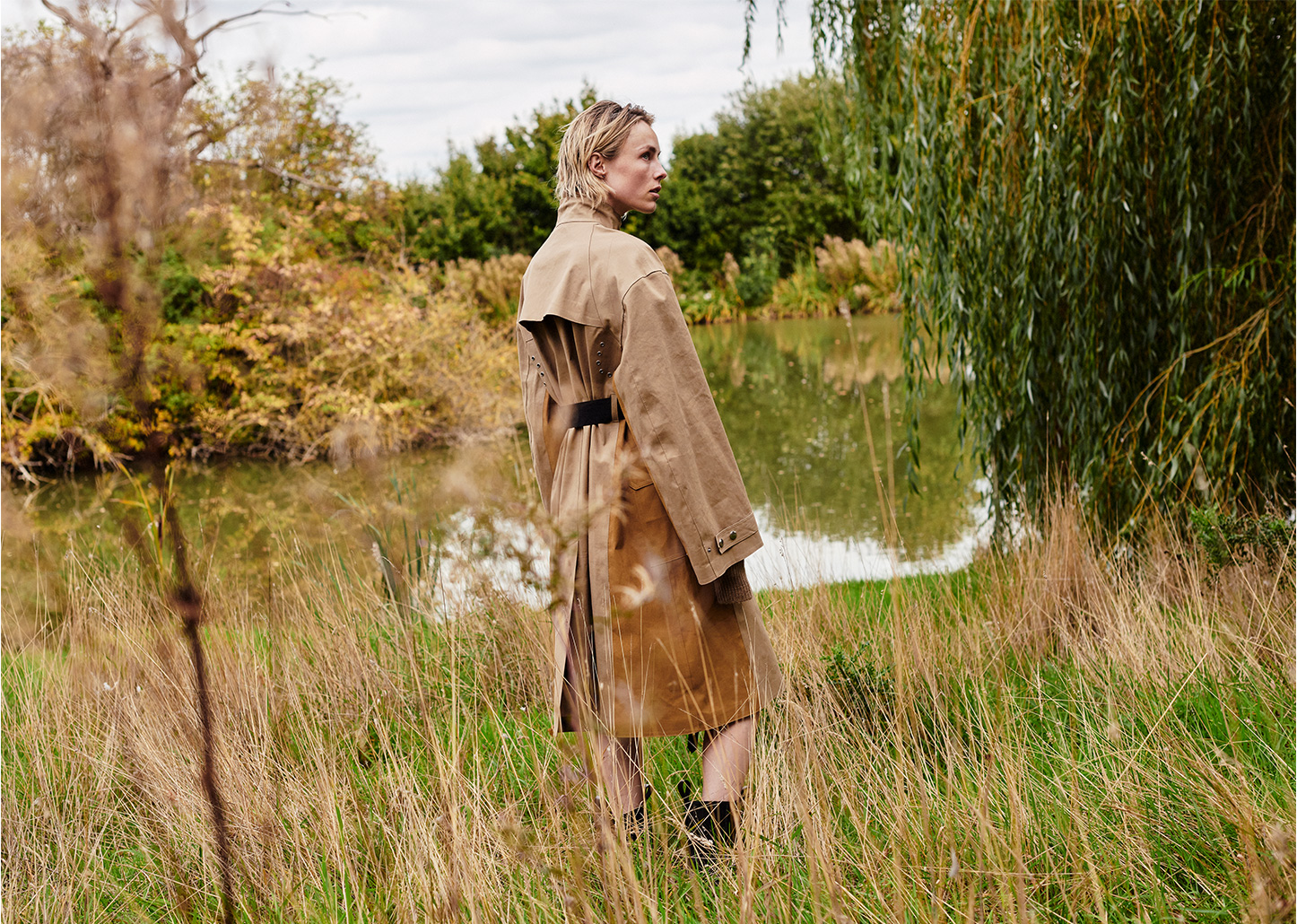 “I would love to say that I live this life of incredible integrity, but unfortunately that is not the reality, and it is something that I battle with constantly”

Edie Campbell has been at the top of the modelling game for 14 years. A regular Vogue cover girl, a runway favourite, the campaign face of Burberry, Saint Laurent, Chanel and well, every brand basically, and was ranked by models.com as an ‘icon’. But she’d much rather be riding horses. Now she is in a position where she can pick and choose the work that she wants to do, but she gives the distinct impression that what she selects facilitates the riding horses part of her life. And quite bloody right too.

Speaking from her little brother’s bedroom in London – “if there is a Doctor Seuss book behind me, it isn’t mine.” – visiting the city for the weekend, after moving to Northamptonshire a year and a half ago. The change of environment has seen her outlook change and led to a valued move away from the convenience culture of an urban society. “I am a lot more conscious of the natural world,” she says. “It makes it a lot easier to not think ‘oh I’ll just jump in an Uber’, mainly because you can’t, and you can see how you can live a life very happily that wasn’t dependent on convenience.” Living in a home nestled between two lakes, designed together with her mother, thankfully the renowned architect, Sophie Hicks, Campbell is now super aware of feeling the forces, and reconnecting with the world. “The slowness is nice, but it is intense too as my day is spent in service of an animal or thinking about that animal, so it is not just my universe anymore. In my universe horses definitely come first.” However, Campbell is aware that the universe she works in, when not at home, is somewhat at odds to the quiet and relatively sustainable country lifestyle. “I would love to say that I live this life of incredible integrity, but unfortunately that is not the reality, and it is something that I battle with constantly,” she says of her job that sees her travelling on a weekly basis and shooting for large luxury fashion brands. “Can I do this and not wreak havoc environmentally? Sadly not, but I think it is the case for everyone that I do what I can do.” 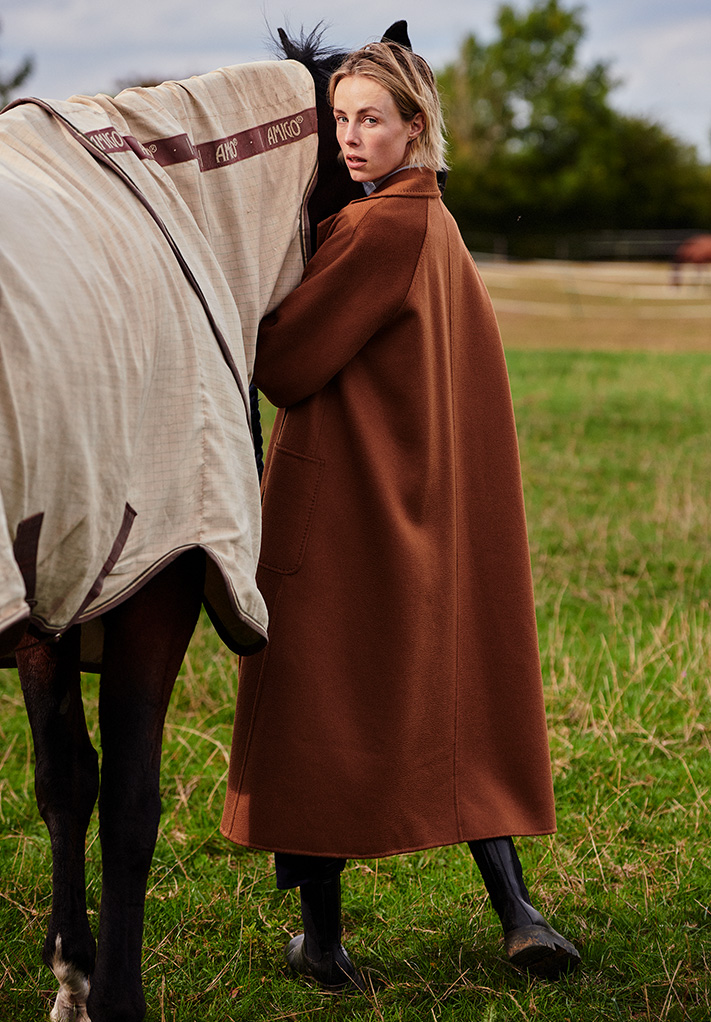 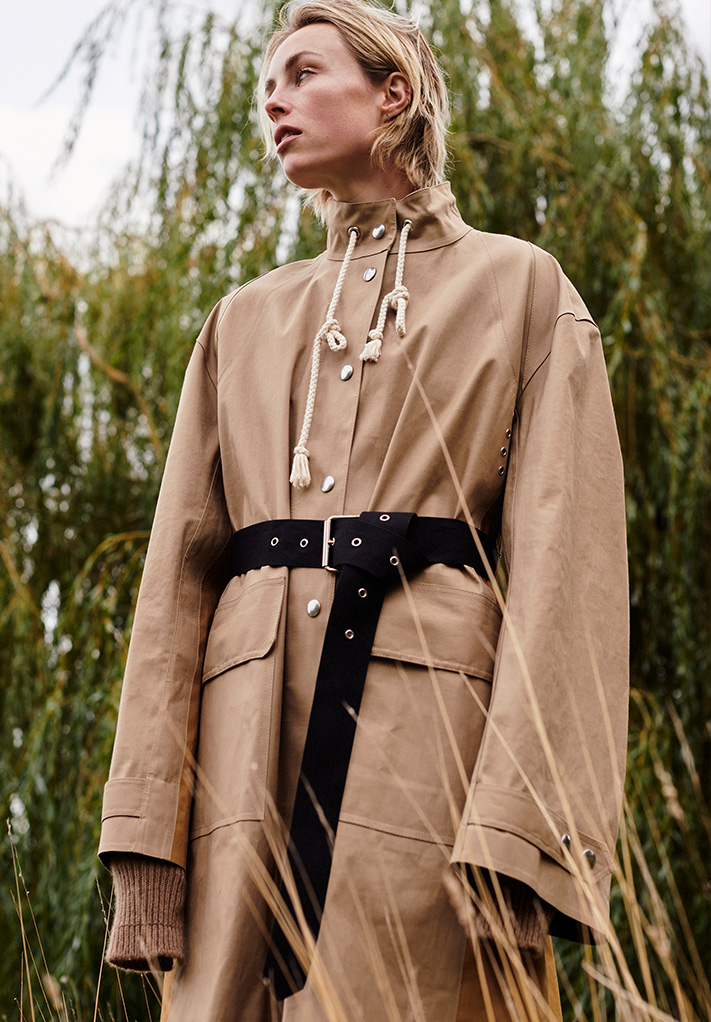 “The seasonality in fashion is inherently unsustainable, as having obsolescence built into it's very core – it's only good for six months and then you will need something new – it's very bad from an environmental perspective.”

Being environmentally aware is a conversation that she has with friends in the industry often. “We often debate it, asking ‘would you do a campaign for, say, a water brand, that use plastic bottles?’ and it is complicated as we all have our price. I am probably in quite a nice position that I don’t have to grapple with whether I need to shoot a Boohoo campaign, But would I shoot a Boohoo campaign? I’d like to say that I wouldn’t, but I don’t know if anything is better than anything else.”

She is fortunate that most of the work she does is in Paris, which is a train ride away and not a long-haul flight, and she chose not to walk in any of the recent SS23 fashion weeks. “I wanted to have a break from that circus. I texted a friend who was in Paris and asked how it was. Maybe she thought I had FOMO, as she replied, ‘it’s exactly the same as it always is, nothing you haven’t done before.’ And that was the perfect summary.”

Speaking just as Paris has come to a close, and those attending the four fashion weeks have finally stepped out of the bubble and realised that most of the world isn’t talking about a Coperni dress sprayed onto a near-naked Bella Hadid, it seems right to reflect why fashion weeks have remained unchanged since pre-covid. Casts of thousands fly over the world attending/modelling/styling/shooting/producing/facilitating the hundreds of shows in New York, London, Milan and Paris. When they were forced to shutter during enforced lockdowns, and moved onto a digital platform, there was much talk on how fashion month and the weight of the shows could potentially change. But the SS23 season proved that nothing much at all has changed or moved forward. But who can lead a change? “The seasonality in fashion is inherently unsustainable, as having obsolescence built into its very core – its only good for six months and then you will need something new – is very bad from an environmental perspective.”

“If one of those big fashion houses decides that they are stepping away from the seasonal calendar and say that they are updating their products from time to time it would be kinda cool, as I suspect that then everyone would try to follow suit. Like when Supreme and Palace were at the peak of their powers and suddenly everyone was doing a ‘drops’ model. The seasonality of it all is exhausting.” 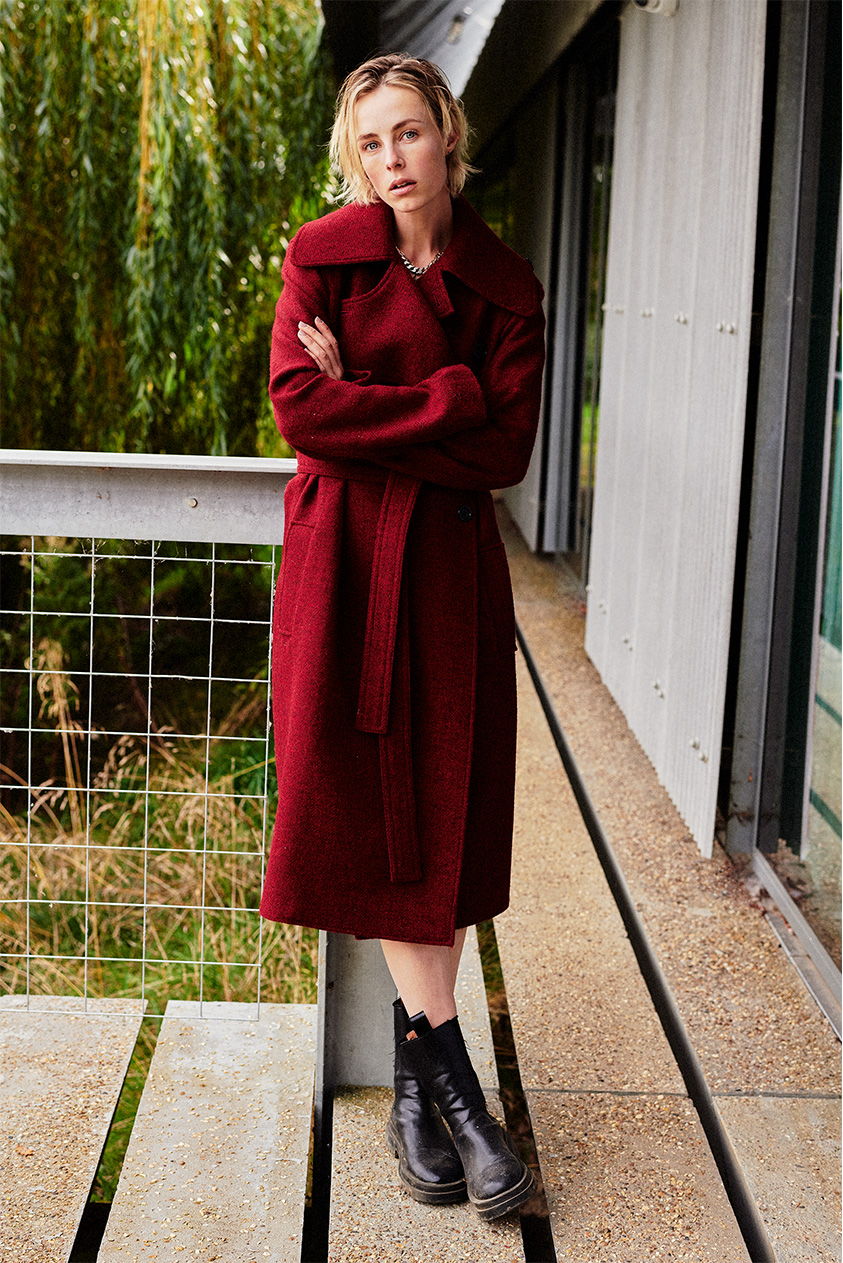 Brilliantly, Campbell isn’t afraid to voice opinions, or speak out on difficult topics. “I am happy to say the uncomfortable thing.” In 2017 she wrote an incredible open letter in WWD addressing the systematic abuse in the fashion industry. Four years later and that is an area where there have been positive moves forward. “I think that globally across all industries there was a moment where they all had to reflect and look at the way they were behaving in a professional environment and look at the way that power relationships unfolded. So, I think there has been a shift and updating of the behavioural codes of how we behave at work, which was long overdue frankly.” Two years later, she wrote a feature for The Guardian, which ran with the headline; ‘Fashion has an environmental problem – and I am complicit.’ Within that piece she admitted that her carbon footprint terrified her, sometimes flying from London to New York and back in a day ‘like it was the most normal thing in the world.’ Her priorities may have now changed, and she wants to be at home more, but Campbell knows that when it comes to the fashion industry and its climate impact, changing consumer behaviour is the key directive. “The problem is we are all funding and encouraging, as our success is dependent on selling more things to more people. Look the battle is fucking enormous, but more and more people are conscious of how they are shopping and where they are getting their clothes from and what their relationship with consumption is.” 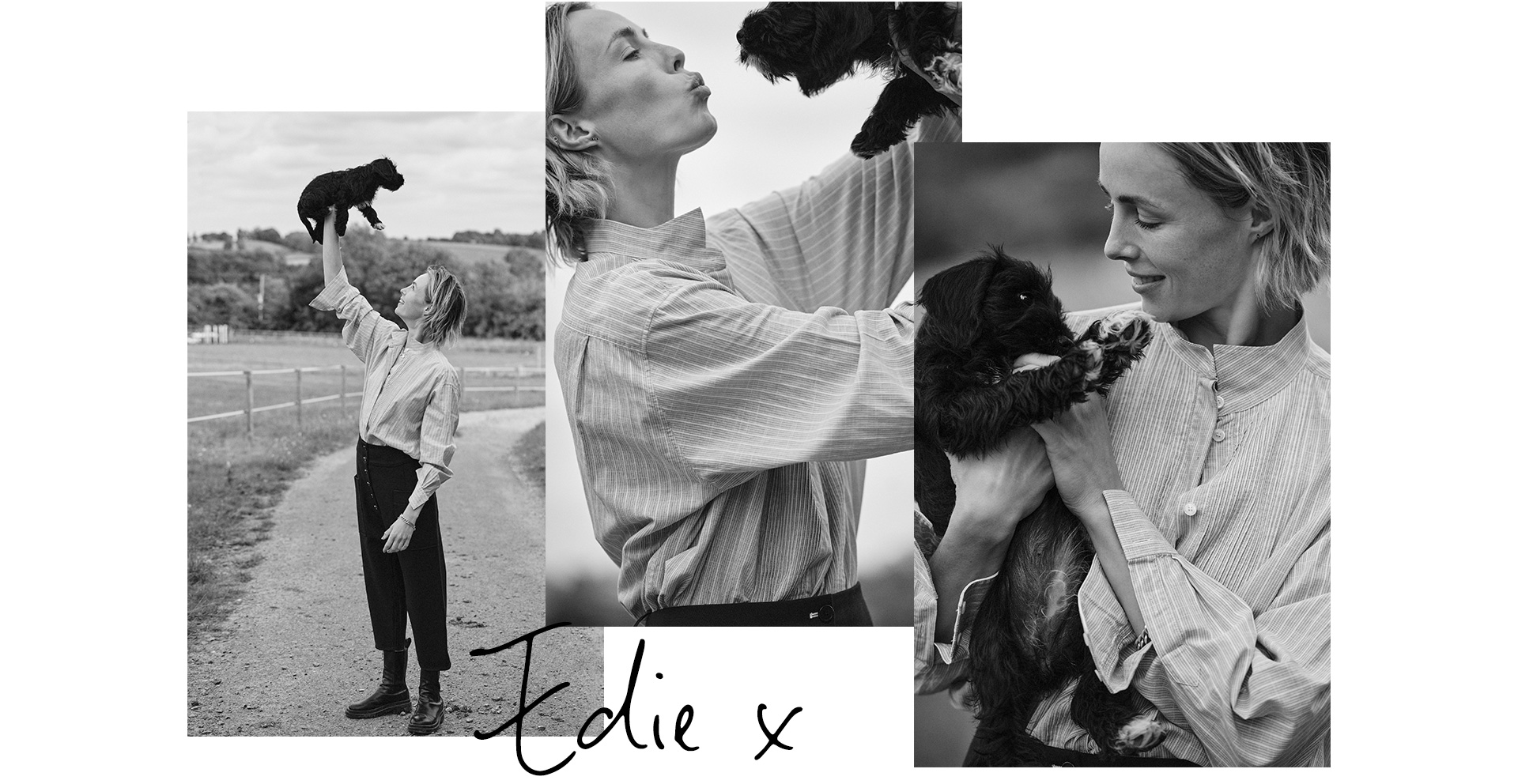 “The problem is we are all funding and encouraging, as our success is dependent on selling more things to more people.”

Campbell is not a shopper and doesn’t like having a lot of stuff. When she was a kid she had friends who would pull all their clothes out of the wardrobe, then fold them all up and put them back, and gently caress them as they were their precious things. That wasn’t Campbell. But she grew up with an understanding of fashion, as her mother was a fashion editor. Although she has a strict uniform. “A uniform means that a lot of stuff gets filtered out, and a lot of what you buy is just in service of that uniform,” she explains. “Mum’s consists of black trousers, a white shirt and like a Comme or Alaia jacket. Everything is really luxe, but there’s not loads of it. On Christmas she wears red velvet, but every other day of the year is monochrome. If you are going to wear something quite anonymous like that it all needs to be super considered. I am envious of people who have a uniform.” Campbell describes her style as ‘androgynous English’, with a love of tailoring. She prefers trawling eBay to browsing a shop, as finds the whole process totally overwhelming.  But don’t misunderstand, fashion is important to her, and the people within it. Campbell still gets excited when her agent sends her a great mood board for an editorial, and she will reply ‘fuck yes, that looks so fun, let’s do it.’ But clothes mean a lot to her too. Or more what they can represent. “I find it so fascinating how other people dress, as that is how they are presenting themselves to the world. The codes they are using and how you read them might be completely different from how they intended them. Fashion is your entryway into understanding them as a person.”